Gorilla MMA Series returns to Belarus: 29th event will be be held in Minsk 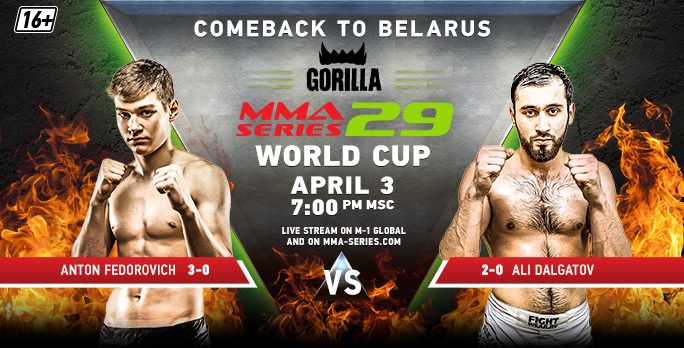 Gorilla MMA Series for the first time in 2021 will hold an event outside of Russia. Successfully survived in such a hard time of pandemic our tournaments are coming back to organize sports events outside of Russia and will come to Belarus for the fifth time in its history. Fight night under number 29 will take place on April 3 in Minsk and is called Gorilla MMA Series – 29: World cup.

Anton Fedorovich from Belarus and Ali Dalgatov from Russia will be headliners of Gorilla MMA Series – 29: World cup because of the main fight. The upcoming fight for Fedorovich will be the 4th in his career. Anton won with confidence the previous 3 fights and 2 of them were by KO. The main fight in Gorilla MMA Series – 29: World cup will be the 3rd in our events for Belarusian middleweight. In 3 and 4 MMA Series events his opponents were Dmitry Pastukhov and Denis Sereda.

Ali “Lion” Dalgatov also has an ideal record. 2 early wins and the last one was in November 2020. Dalgatov will debut in Gorilla MMA Series.

In the co-main fight, we will see Gorilla MMA Series debutants Murad Saidov and Dmitry Zasinets.      The upcoming fight will be the 4th for Dmitry. Zasinets debuted in pro MMA in 2019 and there were 2 wins and 1 loss. His opponent Murad Saidov has only 1 fight in his career. But his amateur career is pretty good: 13 successful fights.

In the first of the 2021 Gorilla MMA Series event outside of Russia we will see a female fight. Karina Chaplinskaya from Belarus will face Anisa Karimova from Russia. Chaplinskaya has 2 wins in a pro MMA career. The upcoming fight with Karina will be a debut for Anisa.