STORM IN SIBERIA: MMA SERIES WILL HOLD THE 25th TOURNAMENT TOGETHER WITH THE LEGENDARY ALEXANDER SHLEMENKO 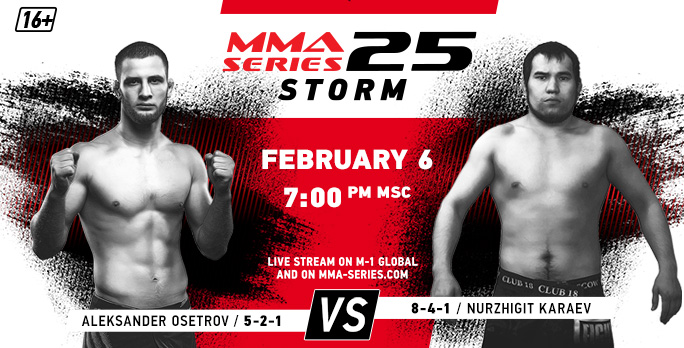 The main event of the MMA Series – 25: Storm will be a fight between Alexander Osetrov (5-2) and Nurzhigit Karaev (8-4-1). Osetrov is a veteran of M-1 Global and RCC and the upcoming fight will be the first in MMA Series for him and already the main fight. 24 years old fighter from Omsk didn’t fight for a year so we can talk about career reload.

Osetrov’s opponent is Nurzhigit Karaev from Kyrgyzstan. He is already known by M-1 Global viewers: in the first case he defeated Said Gadzhiev in the MMA Series – 10, in the second case he lost to another Shlemenko’s fighter Miri Sadygov in the M-1 Selection Online event. Karaev has 2 wins in a row right now and he was fighting 5 times in 2020: 3 wins and only 1 loss.

Another Alexander Shlemenko’s fighter Alexander Podmarev (8-3-1) will face Magomed Aliev (2-0) in a co-main event. Podmarev has 1 fight in MMA Series. He was fighting with Elmar Gasanov in the MMA Series – 21. Draw as a result. Magomed Aliev has no losses. Magomed was fighting for 2 times and the first fight was in 2015. But after 5 years in October 2020 Aliev returned and won by KO. Now Magomed is ready to return after a couple of months and continue to reload his career.

One of the most exciting fights will be the one with Alexey Shurkevich. He has 5 wins by KO and 2 wins by submissions.

Considering the time difference between Moscow and Omsk the stream will be carried out with a time delay in full without any changes. This delay is made so that viewers in all time zones, including on the territory of the North American continent, watch the stream at the usual time.

Live MMA Series streams are available to 80 million households in more than 30 countries: