Gorilla MMA Series to win first title in its history: the belt is claimed by the best fighter of 2020 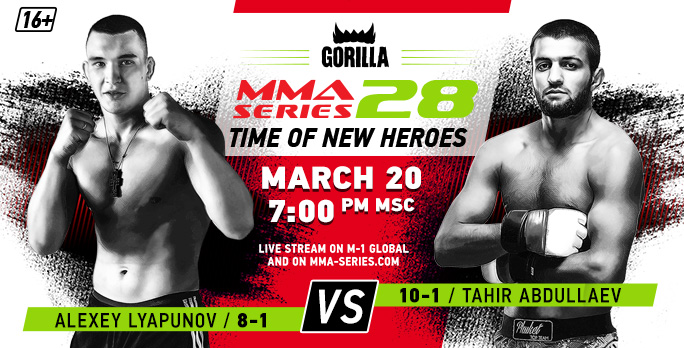 Gorilla MMA Series – 28: Time of new heroes will be held on March 20 in St. Petersburg and there will be 10 fights. In the main fight we will see MMA Series Awards 2020 winner (“Best fighter”, “Best fight”) Alexey Lyapunov and he can be the first winner of the Series title if he wins. Also fans will watch performances from the best Gorilla MMA Series athletes according to last season: Sergey Maslov, Dmitry Tebekin, Maksudzhon Kadirov and Vladimir Yurusov.

The main event fighter of the upcoming event in St. Petersburg Alexey Lyapunov is the three-time winner in Gorilla MMA Series and also the winner of MMA Series Awards 2020 (“Best fighter”, “Best fight”). The welterweight from the Sech Pro team can be the first time MMA Series title winner if he can beat Tahir Abdullaev from Azerbaijan. Abdullaev has 10 wins, 9 of them were early. Now Tahir has 3 wins in a row and the last win was in the 10 Series event.

Dmitry Tebekin will face Elmar Gasanov in the co-main event of Gorilla MMA Series 28: Time of new heroes. Tebekin came to MMA in 2013 and has 18 fights, 12 wins and 6 losses. The last time he came to the octagon in RCC against the Russian famous middleweight Mikhail Ragozin. The last win for Dmitry was in the 9th MMA Series event against Evgeny Mikhalev. His new opponent Elmar Gasanov also fought in Gorilla MMA Series: he fought against Alexander Podmarev in the 21st tournament.