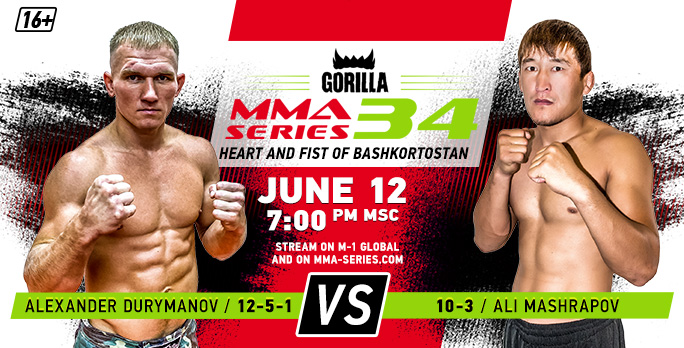 GORILLA MMA SERIES IS BACK TO THE HEART OF BASHKORTOSTAN ON JUNE 12!

Stream of Gorilla MMA Series – 34: Heart & Fist of Bashkortostan will be held on MMA-TV.com on June 12 at 7 PM Moscow time.

It will be the 4th Series fight for Durymanov and in the previous three battles he always won. Alexander’s record is 12 wins, 5 losses and 1 draw. First 2 fights in Gorilla MMA Series he won with only 2 months break, and he beat Almaznek Mamasabirov and Bakhtiyor Yuldashev. And “Wolfhound” got a chance to fight for the title because of her last KO vs Khalil Khalilzade.

But Durymanov will get the trophy only if he beat Ali Mashrapov from Kyrgyzstan, who has 10-3 record. Mashrapov is known for the ability to win by submissions and this is another intrigue because “Wolfhound” also is great at this component.

In the co-main fight we will see heavyweights clash: Sergey Dyakonov will face Evgeny Mikhalev. The Fighter from Murom is well known in Gorilla MMA Series, because he beat Mikhail Sysoev by decision year ago. Now heavyweight from the team of Sergey Bobryshev Gorilla MMA Series star will try to improve his statistics (11-2) at Ufa.

Dyakonov’s rival Evgeny Mikhalev also has been fought in Gorilla MMA Series: in our 9th event he fought against Dmitry Tebekin. That evening was not successful for Mikhalev and he didn’t fight after this tournament. The upcoming fight will be a very important chance for victory, also because his opponent is one of the bright heavyweights at our events.

In the 3rd super fight we will see heavyweights again. The Ex-fighter of the Nashe Delo youtube project Dimitry Andryushko aka Grenade Launcher will fight in Gorilla MMA Series for the second time and his rival will be Khasan Isaev. Andryushko’s debut was in the Gorilla MMA Series – 30 where he KO’d Denis Ezuta and this was his second win in MMA career. His opponent Isaev has 3-0 record and he will debut in the Series.

Also note, fighters from Bashkir MMA school – Unir Bikbaev and Gaysa Kutushev will try their best in their native city.