GORILLA MMA SERIES ENDS THE JUNE WITH A STAR SERIES 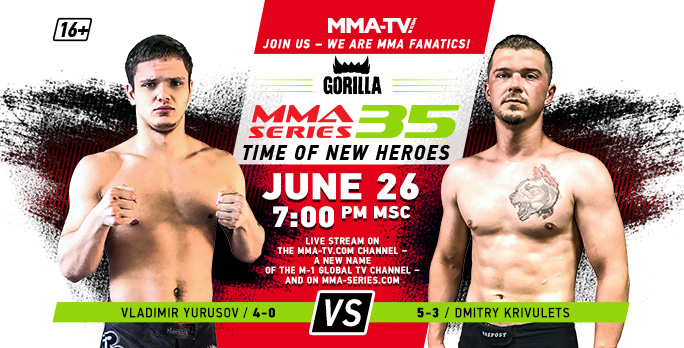 Live stream of the Gorilla MMA Series – 35: Time of new heroes will be held on MMA-TV.com on June 26 at 7 PM Moscow time.

Gorilla MMA Series – 35 will be held on June 26 by the name “Time of new heroes”. At this tournament the battles will be with the well-known fighters for Series fans. And here we pay special attention to a couple of prospects, who will be lighted in the fight card.

Secondly, fans will watch the most active Gorilla MMA Series fighter Artem Semenov. He has 8 fights in the Series, and the last one was at our 31st tournament. Then Semenov confidently won Hakim Zuboitov. And now he will face Isak Guliyev. Fighter from Azerbaijan has a 4-1 record.

Thirdly, one of the Gorilla MMA Series fighters Yan Shipilov is ready to battle in the co-main event after his win at our 34th tournament a couple of weeks ago. His opponent is Vitor Resende from Brazil. He has a 3-0 record.

And of course, we can’t ignore Mark Vologdin’s comeback. He is the most ambitious Gorilla MMA Series fighter. The young prospect from Karelia didn’t win on May 1 and interrupted his amazing 5-win streak in a row. Vologdin will try to return to the win streak and to get a chance for victory in the Gorilla MMA Series title fight. His opponent is Umud Agamirov from Azerbaijan. He has 3 early wins and no losses.

You can watch the Gorilla MMA series tournaments:
• on MMA-TV.com channel in packages of your cable, satellite and OTT operators
• on www.mma-series.com
• on the Gorilla MMA Series YouTube (premium subscription)