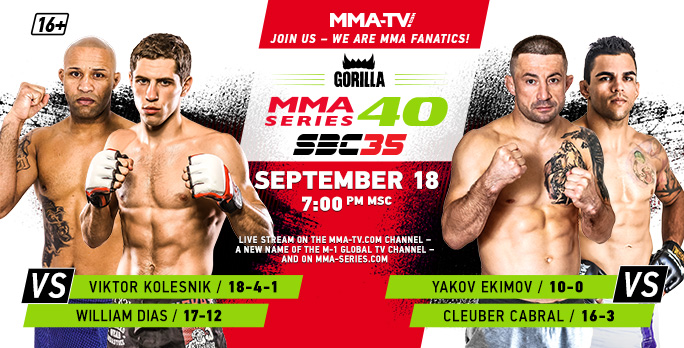 40th Gorilla MMA Series event will be held on September 18 in Serbia. Ten great fights with stars of the Series await. We will see the return of the M-1 veteran Viktor Kolesnik. The Gorilla MMA Series Winner Yakov Ekimov will fight in the co-main duel.

The upcoming fight will be the second in the Series for Viktor Kolesnik from Kuznya Krasnodar fight club. He has many fights at the best Russian promotions like M-1 Global, RCC, Open FC and Tech-Krep. He has 18 wins, 4 losses and 1 draw.

His opponent will be the experienced William Dias from Brazil. His record is 17 wins and 12 losses. Dias has 4 wins in a row and an upcoming fight will be the second in the Series after his successful performance at the Gorilla MMA Series-36: SBC 31 event.

Yakov Ekimov will face Cleuber Cabral in the co-main fight. An upcoming duel will be the 6th fight for Yakov in the Series. Cabral will battle for the second time in the Series: he won against Sebastijan Saciri at the Gorilla MMA Series-36: SBC 31 event. Cleuber has 16 wins and 3 losses.

Also we will see fighters from Serbia, Italy, Bosnia & Herzegovina and Croatia. Don’t miss a live stream on MMA-TV.com channel and mma-series.com!

You can watch the Gorilla MMA series tournaments:
• on MMA-TV.com channel in packages of your cable, satellite and OTT operators
• on www.mma-series.com
• on the Gorilla MMA Series YouTube (premium subscription)