Summin up the results of 2020 at the “Gorilla MMA Series-27: Time of new heroes” 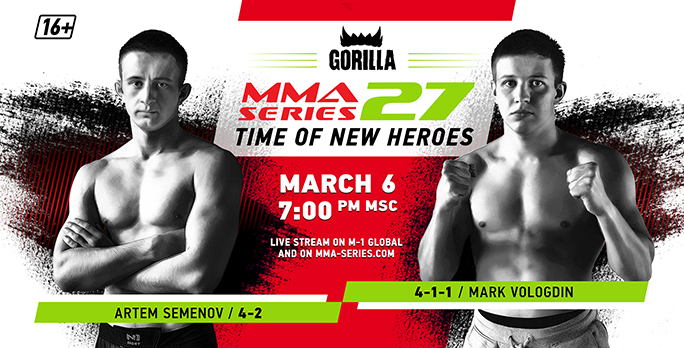 Live stream of the Gorilla MMA Series – 26: Time of New Heroes will be held on M-1 Global on March 6, at 7 PM Moscow time.

Gorilla MMA Series is back to the home pitch: the 27th event will be held on March 6 in St. Petersburg and MMA fans will watch a lot of interesting things. Here was landed the first tournament one year ago, March 1, 2020. And the symbolic thing that we will sum up the results of MMA Series Awards 2020 and celebrate the first happy birthday here.

Fans voted on the mma-series.com in 5 nominations: “Best Fighter”, “Best fight”, “Best Submission”, “Best KO” and “Best Debut”. Also there are some special prizes here to award outstanding fighters who did not get into main nominations.

A lot of nominees will be a part of the March 6 event, so fighters can be awarded even after their fights. And we specially mark the Series debutants. This is Mark Vologdin who has 4 early wins at our events and he is the main pretender to win in the “Best Debut” nomination, Artem Semenov who has been fought more than others in the Series, Andrey Lebedev who has an ideal Series record 3:0.

But we will find out the winners only during the “Gorilla MMA Series 27: Time of new heroes” live stream.

M-1 Global is available on major satellite, cable, and OTT networks in Russia and 38 countries.