GORILLA MMA SERIES GOES TO BROTHERLY COUNTRY: THE 36th EVENT WILL BE HELD IN SERBIA 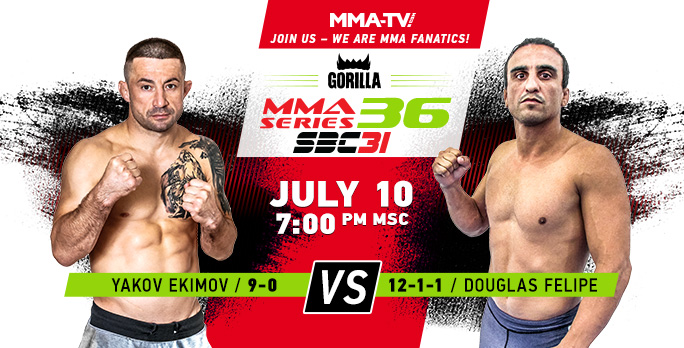 GORILLA MMA SERIES GOES TO BROTHERLY COUNTRY: THE 36th EVENT WILL BE HELD IN SERBIA

Yakov Ekimov from Kuznya Krasnodar fight club is going to get the Gorilla MMA Series Winner title in the main fight. This fight will be the fifth in Gorilla MMA Series for the Russian fighter. He won four previous battles and this result gave him a chance to fight for the title. 33 years old Ekimov has a 9-0 record. Possible success can become a double jubilee: it can be the tenth victory in the career and the fifth in Gorilla MMA Series. His rival is Douglas Felipe from Brazil. He has a 12-1-1 MMA record. Felipe has 10 wins by submission and he represents Brazilian jiu-jitsu as his best side.

Nikica Vujicic from Bosnia & Herzegovina will face Dragutin Jegdic from Serbia in the co-main fight of the Gorilla MMA Series – 36: SBC 31. The upcoming event will be the first fight in the MMA career for both fighters.

The Gorilla MMA Series – 36: SBC 31 promoters made a great fight card with a lot of fighters from Europe. Most of them represent Serbia. But also, there are fighters from Brazil, Croatia, Bosnia & Herzegovina, Israel, and Luxembourg. An interesting fight will be with Denis Ekimov (1-0), he is a Yakov brother. He will face Zoran Dod from Croatia with a 13-16-1 record. Also, we have another Russian fighter from Kuznya Krasnodar fight club. Alexander Oganezov with a 1-1 record will battle Dzevad Muftic from Bosnia & Herzegovina.

This year, the MMA-TV.com channel (a new name of the M-1 Global TV channel) got the Golden Ray National Award in the field of satellite, cable and Internet television in the Sports TV channel nomination. This is the overall success of our team, TV channel, Gorilla MMA Series, our partners, fighters and viewers!